skip to main | skip to sidebar

Feeling sorry for myself...

After a little Ultimate Frisbee collision I've ended up with a very bruised and swollen elbow. Not thinking it was too bad, I did drive the next day, but soon realised it was a mistake.
(the photos really do not to it justice!!) 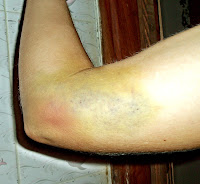 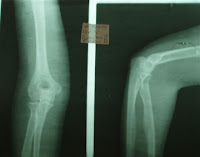 Headed to Emergency Hospital the next morning, and although I had a fair wait, finally got the xray which confirmed no obvious break.
Have to say though, a week down the line I'm still hurting, can't put much force through it and some movements are still restricted. I'm trying to be good and rest it as much as possible. But having spent one day in the sling, it really did attract even more attention than normal, now I don't wear it any longer, but I am trying to protect it as much as possible. 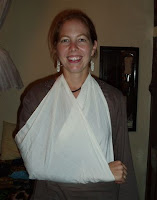 Lets hope for a speedy recovery or I will be heading to the nearest NHS when I get back to UK!!

Crowds and Passers by...

One of the many things that annoy me about trying to work in the communities
is the passers by.
I can go nowhere without being noticed, and when I linger in one place for longer than a few moments, like when I'm treating a child, give it a few minutes and a crowd has gathered.

Sometimes it's children, who then make lots of noise or start fighting,
distracting the child who is supposed to be working.

Or maybe other women, who chip in their bit of information about the childs history,
hich often makes the story very confusing and often untrue.

It can be the older men in the community, who come to tell me how to do my job,
which I wish they wouldn't.

Or the younger men, who just want to come and watch the white woman
crawl on the floor and 'play' with the children.

The crowds can sometimes be useful, in terms of teaching the value of the disabled child. If I put in the importance to keep visting the child, then they realise that the child is someone special and worth their love too. The crowd can help at traslating information, or help encouraging the carer to do the exercises when we're not there. I often also use them to coax the child into doing what I'm trying to do, often it comes better from a sibling or friend, though generally not by an adult with a cane!

But this afternoon the 'crowd' did nothing but annoy me.

Having chased them off, children and adults alike, as I tried to assess a severly malnourished and dehydrated 1 year old. It took about an hour to get a clear history and make a plan with the carer. It turns out the mother died in childbirth, and the baby has been passed from aunty to aunty, till this aunty got him 3 days ago, and knowing the a white man visits his neighbour every other week, decided to wait for me to arrive and make the child my problem. How women or anyone in fact can leave a baby to become a bag of bones I just don't understand. So I was so cross about this already.

Then as I was trying to take some plaster casts off another 1yr olds feet (who has clubfoot),
2 other men walked past, stopped and stuck their noses in. I refused to continue as I hate working with an audience, and a lapse in concentration could lead to cutting Khallon's leg,
I decided in my fuming it was better to just stop.

When I wouldn't continue, the men proceded to tell me that it was a public walkway, which it was as were were right outside the patients house in a slum area behind a busy market. They told me to go somewhere private if I didnt want anyone watching, but this family for sure would not be able to afford to come to a private clinic even if I had one! Inside the 1 roomed house the floor could not be seen for the mats that they lie on, and it was too dark anyway as obviously no power. So these men persisted in being annoying and rude, and not leaving, till they told me I'd be better going back to where I'd come from. I shouted back in my anger, yes, well I'd love to go back to England, just send me!!
They just laughed at me, and I then added, but
"I won't go because it the children of your country that are benefitting".

It's is only them who would suffer if let the frustrations of working here get to me too much.

So my thought at the end of it, was that if we were not there in the depths of that camp,
the malnourished kid may have died,
and Khallon would always have clubbedfeet and may never walk.
Instead, hopefully, we saved the life of one child,
and enabled a child (in the long run) to have a chance to learn to walk.

So on we went, albeit with smoke coming out of my ears in anger and frustration
and the sun pounding down mercilessly on my head just to help the matter.

Last week one of my 4 year old patients 're-appeared' again in Freetown.
She had been gone for nearly 2 months.
Where?
Her family kept telling me she's gone upline....to get medicine to get better.

Sadly, the bright little girl has Cerebral Palsy caused by brain damage during a traumatic birth (very common here), and will never fully 'get better'. She will always have physical problems aswell as speech problems, and due to those she will unlikely succeed at school even if in the very unlikely event that she even gets a chance at school here.

So who had they taken her to?

Well the story goes that a lady had seen her in the market and spoken to her mum, saying she knew of a old man upline that could fix the problem and make this child walk again.

Now, if your chid had a disability and were promised this, would you not go for it?

Then if you found out that it meant going to see a traditional medicine man,
.........would you still go for it?

It's easy for us to be quick to jump and say she did the wrong thing. But as a desperate mum she was only trying to help her child get better.

A medicine man practices in traditonal medicine and witchcraft which is why I certianly DO NOT think it is a good idea. Spiritual practices are all too common here and there is great power in them, though not a good kind of power. Strongholds and curses are totally believed in and in reality do make a negative difference on people's already desperate lives.

So when I asked what exactly he did....
Apparently using various kinds of local herbs, seeds and leaves, pounding and boiling them together, he then wrapped her legs in the leaves to dry out. This happened daily along with stretching the legs.

So is that so bad?
- well actually depending on how the stretches were done, that is something we had already taught mum to do.
As for the leaves, well I can see how warmth could help reduce the stiffness caused by abnormal tone.
But I dont like is the witchcraft that is the basis of it all. And the likely large amounts of money invovled. No one has spare money around here and everyone is desperate to make money, but it is totally wrong for one poor person to give false expectations and rob another poor person.

I asked my patients mum if she feels her child had improved at all, she said no.

I'm just thankful that the child came back alive. I have heard many stories before about witch doctors offering to take these disabled children 'back to where thay have come from', in other words disposed of. The thought of killing a helpless child just because they are disabled churns within me. But here being able bodied is hard enough to survive - what chance do you or your family have if you are disabled?

I explained that I understood her reasons for going, but begged her not to go again. Explaining again that the cause of the problem is in the brain and that no medicine or operation would change and that getting invovled in witchcraft is certainly not the answer.

For a while now they had been doing well with the exercises and activities we had been doing with them, so we persuaded them to continue with these. Unfortunately progress with these kinds of kids is slow and can therefore be discouraging for the family.
However she is actually close to walking with a frame for herself now, so lets keep praying to our Almighty and Powerful Lord Jesus - who is the only true and good Healer of all.
at 12:56 1 comment: 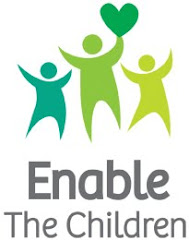